But to be relevant, many biotech companies have realized that they need to use appropriate tools and people. With young leadership in social media teams, the following companies social media platforms have thrived and become excellent examples of what to do to create engagement and awareness online.

Boehringer Ingelheim is a research-driven group of companies dedicated to researching, developing, manufacturing and marketing pharmaceuticals that improve health and quality of life in every living being. This biotech company focuses on the following elements of healthcare: prescription medicine, consumer healthcare, animal health, and biopharmaceuticals.

Together with its partners, Boehringer Ingelheim objectives and beliefs can be summed up in a single phrase: Value through innovation. This central concept has become the corporate vision of the brand, and together with its corporate culture, this biotech company aims to lead and learn in the industry of healthcare and biotechnology.

Led by two young millennial women – Patricia Alves and Jaclyn Fonteyne –  Boehringer’s social strategy has a strong backing up the corporate chain. Since 2013, when both women started working for the biotech company, they have developed a tweet chat with specific topics and hashtags, including #COPDchat and #ChatAFib.

The chats gained significant first-mover media attention–including a selected case study by Twitter itself, highlighting it as good business practice. 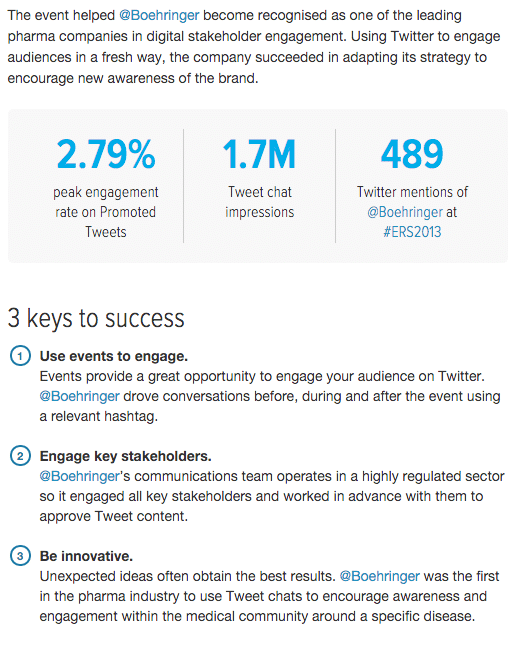 Boehringer’s overall social efforts are broad and engaged as it is active on 8 out of the 10 social networks. Unlike other biotech companies, Boehringer’s social media accounts are all cross-linked and even feature on its website’s home page. Boehringer is exceptionally active on Pinterest (27 boards), Vine (714 followers) and Instagram (921 followers).

Novartis is a global healthcare company based in Switzerland that provides solutions for the evolving needs of patients worldwide. Applying its expertise in science and innovation to society’s biggest health challenges, this biotech company has a core value of responsibility in the healthcare industry.

Novartis focuses on three divisions with innovation power and global scale: pharmaceuticals, eye care, and generics. With an aim to develop innovative products in growing areas of healthcare, Novartis is expanding their presence in the emerging markets of Asia, Africa, and Latin America. In all these emerging markets, there is a fast-growing demand for access to high-quality medicines and healthcare, and Novartis is willing to provide for that demand.

With one of the bigger audiences in the industry, Novartis would seem to have an advantage when it comes reach and engagement, compared to other brands. Novartis is most active on Twitter and Facebook, but also have a YouTube channel where they include videos about scientists sharing views, executives talking about financial results and patients discussing their conditions. 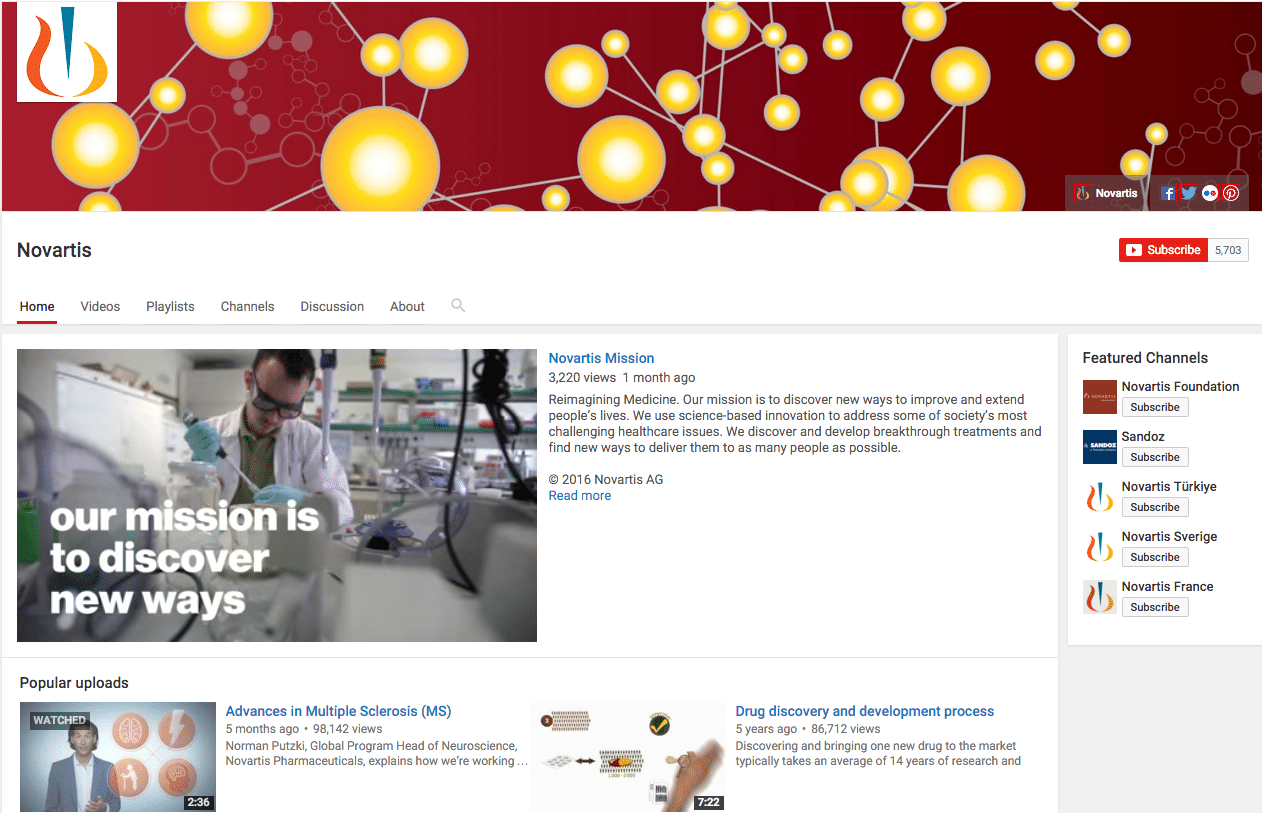 Novartis often focuses on and singles out one of the more than 40 rare diseases its scientists are working on. Over the past years, they have included patients views and stories on social media about hormonal disease acromegaly, genetic tumor disease TSC (tuberous sclerosis complex), and blood cancer polycythemia vera.

Using different Twitter tactics to engage consumers, this biotech company uses twitterviews, or interviews conducted on Twitter to encourage engagement. They have done interviews with organizations such as Women Heart organization on heart failure at #HFtwitterview. 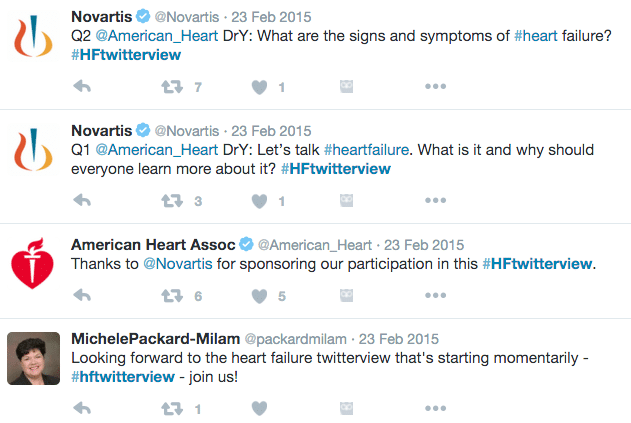 The Novartis social media team has also done several tweet chat including #MYDCchat (Make Your Dialogue Count). This chat encourages advanced breast cancer patients to make conversations with their doctors. Another tweet chat that this brand has pioneered is  #Time2DoMore which is the name of the marketing program to support Type 2 diabetes patients that also includes YouTube videos, custom surveys, and a web-distributed infographic.

From developing new therapies that treat and prevent disease to helping people in need, Merck & Co. is committed to improving health and well-being globally. To make a difference in the lives of people all over the world, this biotech company uses innovative medicines, vaccines, biologic therapies and animal health products.

As a company, Merck & Co. is committed to improving health and well-being around the world. From developing new therapies that treat and prevent disease to helping people in need, the company is guided by a rich legacy and inspired by a shared vision that runs throughout the core of its business. Along with this vision, Merck & Co. is driven by a desire to improve life, achieve scientific excellence, operate with the highest standards of integrity, expand access to our products and employ a diverse workforce that values collaboration – which can be seen on the company’s social media networks.

Merck & Co. launched its social media presence in 2011 when it joined both Facebook and Twitter. The thinking behind the company joining social media was to continue to reinvent the brand to meet the realities of the new pharma marketplace; social media will go a long way in helping re-shape their image.

Unfortunately, since 2011, Merck & Co.’s social media community has remained small, with Facebook posts sticking to a safe corporate tone, and its Twitter feed mirroring that tone. On the positive side, the company’s “Merck for Mothers” segment-targeted Facebook and Twitter pages are more conversational and have thrived in comparison to its main pages. 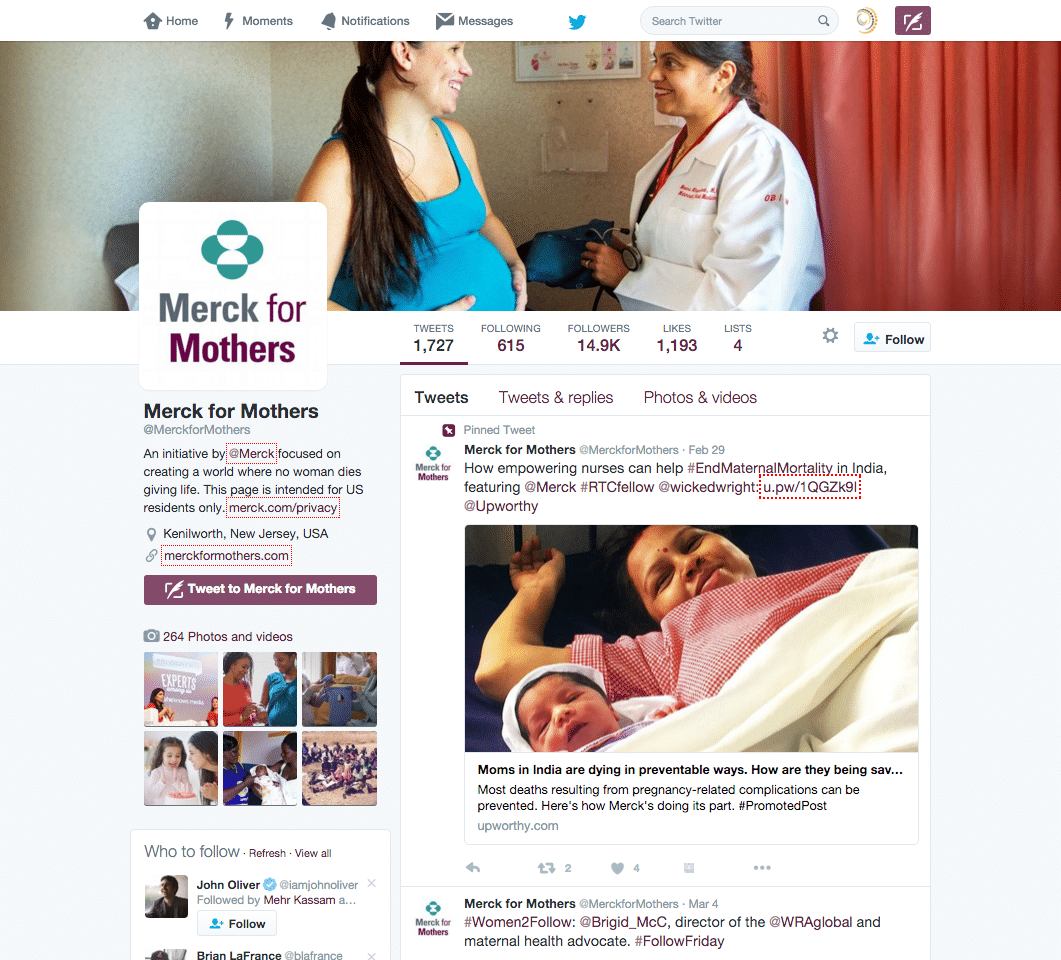 Post on Facebook garner hundreds of likes compared to the dismal few that Merck & Co page gets. Merck & Co. does have an occasional “meet the scientist” feature that adds some personality and gets better engagement. This goes on to show that even if you are in a boring industry, you can still create and tell stories which Merck has done by building a sub-brand that focuses on women issues and that way they’ve built an engaging audience.

Amgen is one of the world’s leading biotechnology companies. Amgen is a values-based company who uses science and innovation to transform new ideas and discoveries into medicines for patients with serious illnesses. Amgen aims to use cutting-edge science and technology to study the subtlest biological mechanisms in search of therapies that will improve the lives of those who suffer from serious diseases.

Amgen is committed to unlocking the potential of biology for patients suffering from serious illnesses by discovering, developing, manufacturing and delivering innovative human therapeutics. Amgen’s medicines treat serious illnesses in more than 75 countries worldwide and have reached millions of people in the fight against cancer, kidney disease, rheumatoid arthritis, bone disease and other serious illnesses.

With a following of 36,000 people, Amgen is doing an excellent job on Twitter by celebrating those people who benefit from their products. Not only do they associate themselves with their beneficiaries, but they do it in a proud way. The brand comes across as caring for the people who use their products, and share mostly about their involvement with these people, companies and organisations.

Amgen also share various resources in the form of videos and videos, but unlike Gilead Science’s the engagement with their content is not as high. This could be due to the lack of infographics or the reason that Amgen uses its Twitter account as a form of associating itself with other brands that benefit from their product, and a way of thanking specific organisations for their support. 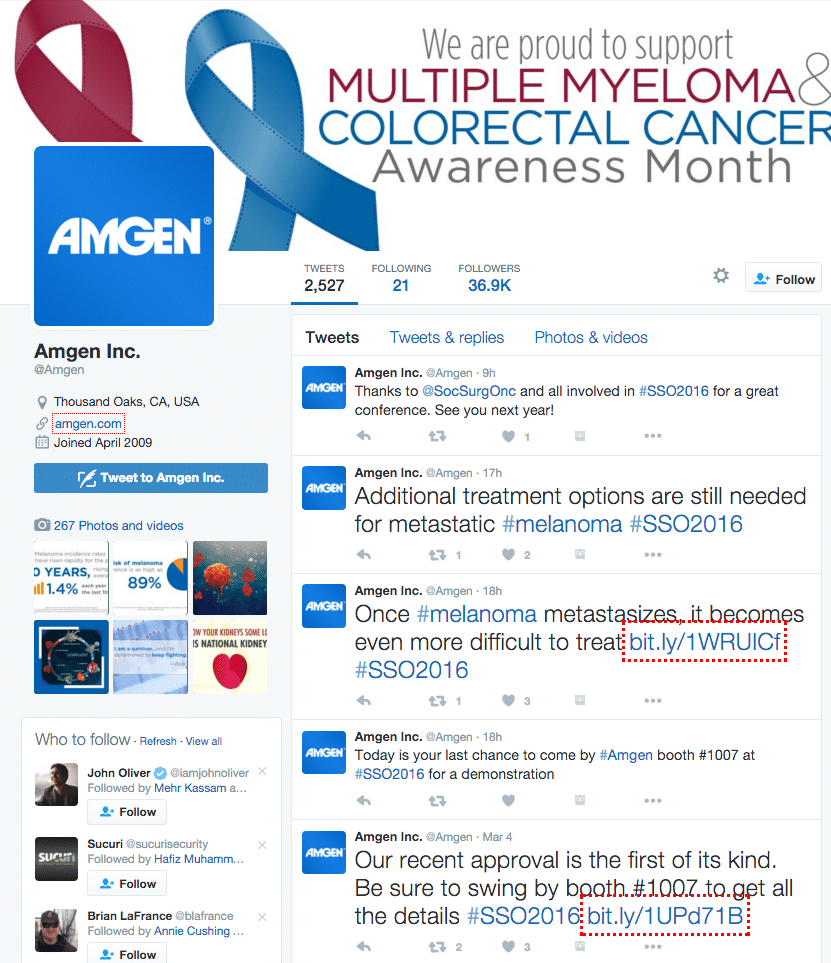 Even though this is a different way of using social media, it shows that this brand is not afraid to share the success of other brands and organisation. Instead of seeing a competitor, they see another warrior trying to change the world.

Gilead Sciences is a research-based biopharmaceutical company that discovers, develops and commercializes innovative medicines in areas of unmet medical need. As a company they strive to transform and simplify care for people with life-threatening illnesses around the world.

With a portfolio of products including treatments for HIV/AIDS, liver diseases, cancer, inflammatory and respiratory diseases, and cardiovascular conditions, this company is doing powerful work to fight deadly diseases.

Gilead was founded in 1987 in Foster City, California, and has since then grown to become one of the world’s largest biopharmaceutical companies. Today it has over 8,000 employees across six continents, and is continuing to grow and develop products to better the world. 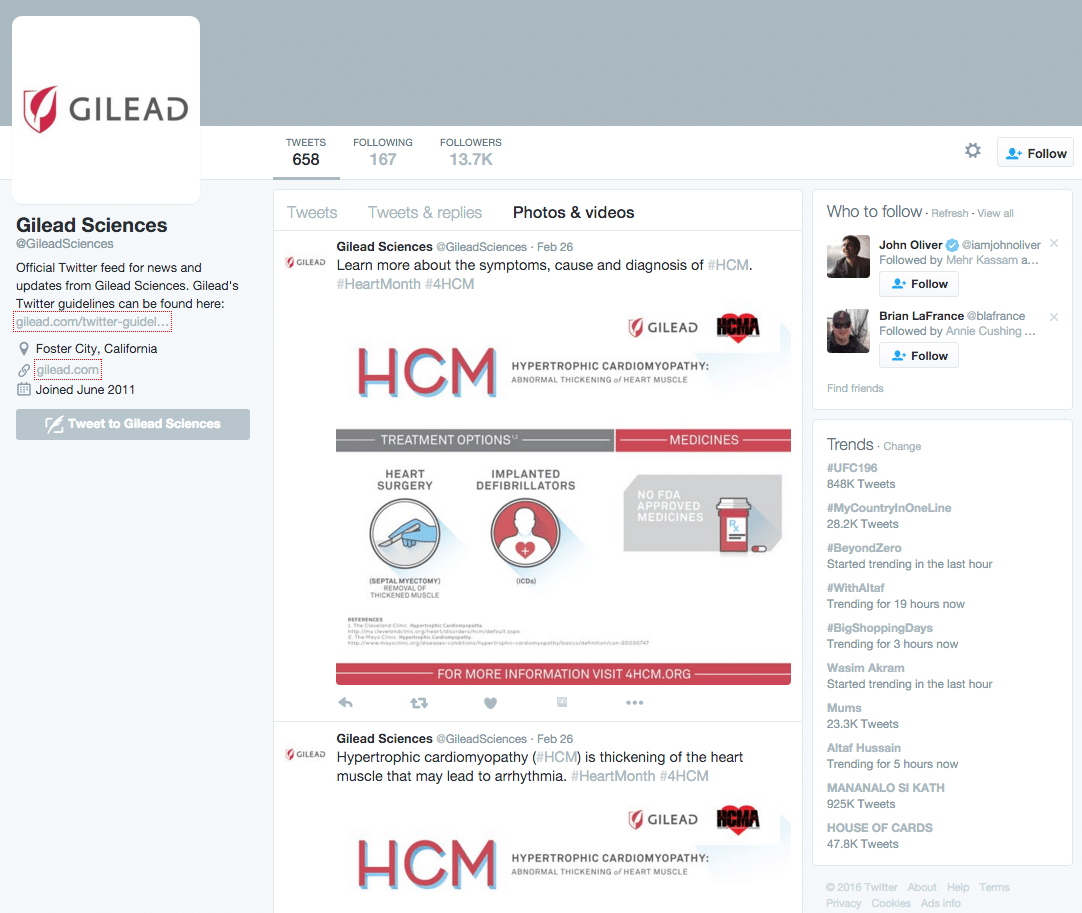 But they’re not a brand that engages with their audience and unfortunately Gilead Sciences have got a lot of negative feedback on Facebook and has therefore only have an unofficial page on this social network. This unofficial page has mixed reviews, and it would be potential be helpful if a community manager for the company could respond so some of the questions of this page.

This goes on to show that having a mere big number of followers doesn’t translate into anything if the campaign isn’t backed by a strong idea that is supposed to have an impact on its audience.